Once installed, the Add-In is usable from two alternate and equivalent menus. The first menu is titled “XL excellence” and is in the main Excel ribbon. 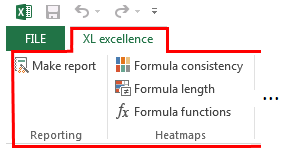 The second menu is in the ADD-INS ribbon. 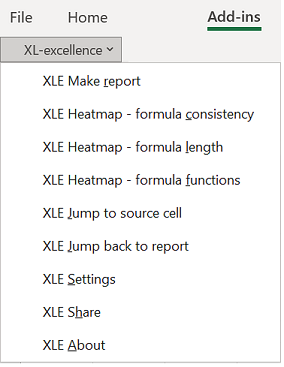 Menu items and their functions are detailed below.

This is the main menu item and generates a report on the currently active workbook. The original workbook is not altered and the report appears in a new, separate workbook.

The front page (first tab) of the report looks like this .. 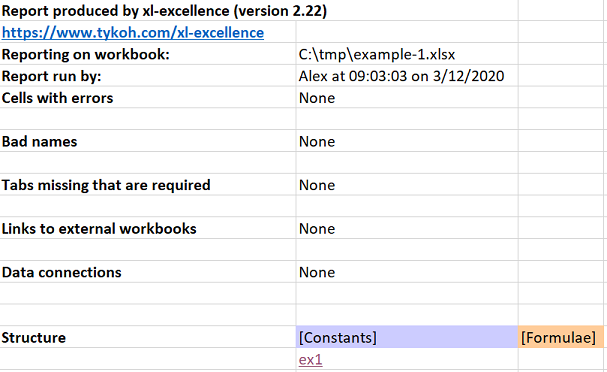 The report includes the following information.

The sub-report looks much like the corresponding tab in the original spreadsheet (not shown here). But there are some important differences: The colors have been altered. The colors in the report indicate whether the cells in the original spreadsheet had constants or formulae in them. Cells that contained constants are shown in the blue-gray colour and those that had formulae are shown in a tan colour.

As a general design principle constants and formula should be seperate and the colouration in the sub-report gives an overview of how well (or not) this is achieved.

Having hyperlinked to a sub-report we can now use other menu functions for a more in-depth analysis.

One measure of spreadsheet quality is consistency between formulae. Clicking on the "Formula consistency" menu item will show the consistency (or not) of formulae. 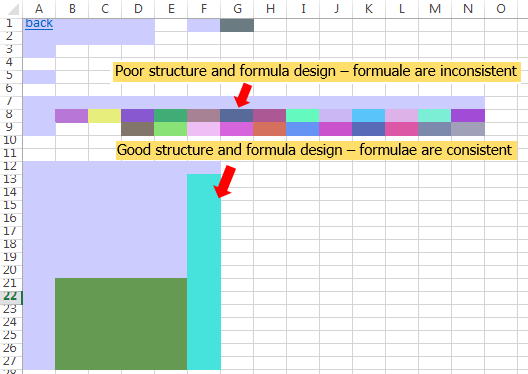 Clicking on this menu item will regenerate the heatmap. Colours will indicate formula length or complexity.. 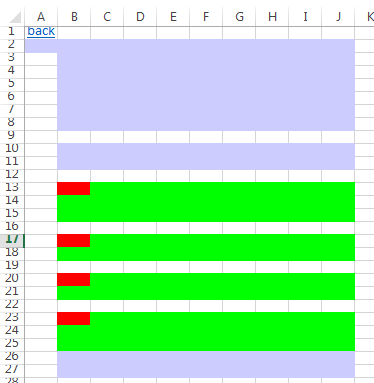 Colours will be green, orange or red depending on the complexity of the corresponding formulae in the original spreadsheet. Formulae less than a defined length are shown in green, greater than another defined length in red and in-between in orange. [The Settings menu item ‐ see later ‐ is used to define the length thresholds.] “Red” and “orange” formulae are potentially over-complex. Consideration should be given to breaking large complex formulas into smaller, simpler ones.

The Settings menu item can be used to specify which volatile functions are allowed and which disallowed.

Jump to from heatmap to source worksheet

Use this menu item to jump from a cell in a heatmap to the corresponding cell in the original spreadsheet. This lets you inspect the underlying formulae in the original workbook. Take cell G8 in this example ..

G8's colouration indicates that formulae in row 8 are inconsistent with their neigbouring cells on the same row. To find out why the formulae are inconsistent cell G8 can be selected and then click on the menu item. Selection will transfer to cell G8 in the original spreadsheet ..

The underlying problem that leads to this inconsistency is that in one part of the spreadsheet dates are in column order and in another they are in row order. To resolve the problem dates should have the same orientation in both sections, or if that cannot be achieved, use the INDEX function in the formulae in row 8 to achieve consistency.

Breaks in colours may indicate inadvertent inconsistencies. Following is an example.

There is a break in colour between cells X55 and Y55. A jump to the source cell of X55 reveals ..

Jump back to heatmap

This menu item reverses the jump caused by the menu item Jump from heatmap to source worksheet.

If you close the original workbook whilst you are examining the report the "jump" functions will no longer work. In other words - both the original spreadsheet and the report need to be kept open for jump to work.

Use this menu item to set options. 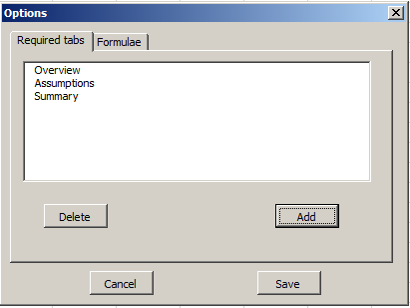 When a report is run a check is made to see whether “required” tabs are found in the workbook being reported on. Missing tabs are listed on the report. The Required tabs page lets you set the names of tabs that should appear in all workbooks that will be reported on. 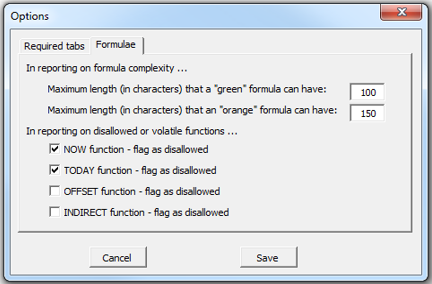 The Formulae tab lets you set thresholds for colours that are reported by the heatmap Formula length menu choice.

If you wish to share the Add-In with others then press this button. A draft mail will be composed and the Add-In attached to the mail. You can then review the draft, add a list of desired recipients to the “to” and/or “cc” field(s) and then send the mail. (Note - this Sharing feature will work only if you have Outlook mail installed.)

Use this menu item to shows the Add-In's version number and installation location. There is also a button to press to check whether a newer version is available to download.